The state of the South African Housing Market is under pressure now more so than ever before owing to the spread of COVID-19. Though the national lockdown only started near the end of March, Adrian Goslett, Regional Director and CEO of RE/MAX of Southern Africa, says that the Housing Report figures for the first quarter of 2020 already reflect the start of COVID-19’s effect on the property market.

“According to Lightstone Property data, a total of 37,609 bond registrations were recorded at the Deeds Office over the period of January to March 2020. This translates into a 5.6% decrease in the number of bonds registered YoY and a 1.2% decrease QoQ. Beyond this, the number of transfers (both bonded and unbonded) recorded at the Deeds Office between January and March amounted to 51,315, which is a 10.5% decrease from last year and an 18.7% decrease from Q4 2019. These figures all suggest that concerns around COVID-19 have already slowed activity within the housing market,” he explains.

Freehold Properties Outperform Sectional Titles
Interestingly, sectional titles seem to have been affected the worse by current market conditions. Reflecting a significant decline, the national median price of sectional titles* dropped by 8.2% to R963,971 from the R1,049,810 reported in Q1 2019 and dropped by 5.9% since last quarter.

“The average bond amount granted during this period decreased by 1.2% since last quarter to R1,098,000* and by 0.4% since Q1 2019. This might reflect the slight downward pressure on property prices,” says Goslett. 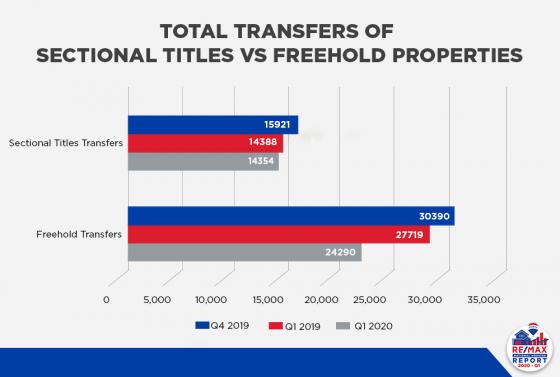 “Considering how poorly our economy is performing, one might expect to see a decline in activity within the higher price bands. However, the current figures do not reflect that any one price band has seen a significant shift in market activity,” explains Goslett.

Reviewing the provincial property markets
Gauteng continued to dominate the top five searched suburbs nationally on remax.co.za during Q1 2020, claiming four of the spots with Morningside landing the number one position for the third consecutive quarter, followed by Fourways, then Musgrave in KwaZulu-Natal, Faerie Glen, and lastly Bryanston.

Final thoughts
“The results of the first quarter paint a picture of what is ahead. My prediction is that we are likely to see even slower growth in the next quarter as our economy recovers from the lockdown and the other fiscal consequences of COVID-19. That being said, I am confident that investors will stand to make good returns by purchasing property now,” Goslett concludes.